So by now it's Friday. We've been in LV since Monday. The Dog has had a severe ass-whipping at the tables and the slots. But I was still holding a few bucks. We decide on some retail therapy over at Fashion Show. He got great new kicks from Nordstroms and a few shirts and whatnot. I got some kicks from Journeys, plus fat laces for my shell-toes! (Men, listen up - if you don't have a lady in your life to pick out your shoes, go to Nordstrom. They have extraordinary footwear and a well-trained staff to get you looking right. Go ahead. Spend a dollar.)

Fashion Show was a fine spot to take a break from all the gambling for a minute. I imagine it's air conditioned in the summer, too.

Anyway, back to the casinos! We drove up to The Linq with The Dog remarking that it was kinda ghetto driving up to the entrance. I have to agree with him on this. The valet was not backed up, a bit surprising given that it was Friday of NYE weekend. But it was only about 2pm. My email confirmation mentioned that because I was Platinum, I could go to the Diamond checkin. So we did. Upon arrival, we were offered champagne by a go-go girl and then were called up. The fella checked us in and let us know we could get our wristbands and info for the NYE party at the TR desk. We were there on a four-day comp that included the NYE party and $150 resort credit. Cool enough for us to go ahead try out The Linq.

As a side note: CET rolled out a new program for military/veterans - free upgrade to Platinum! Go to the TR desk and show them your military ID/retiree ID or DD214 and you'll get the upgrade. Spouses are also eligible though apparently we get it only for a month at a time.... The Dog's new Platinum card has no expiration date; mine expires at the end of January. No biggie because I already had Platinum but still.... 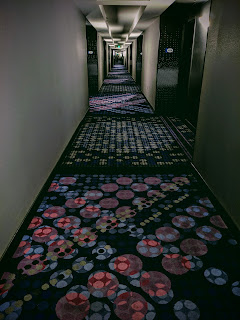 The Linq is a weird hotel. It seems to have an identity problem. We were located in "District 3" on the 7th floor. The walls inside the hotel are dark grey with randomly placed fluorescent tubes for lighting as sconces on the walls and there is this odd dotted wallpaper near the doors of the rooms - evocative of the 80s, sorta.

But inside the room, there is a bright and splashy back wall paper with jewel tones and metallics and a modern vibe. The beds are fucking fantastic there. Seriously. (also, I forgot to mention how tiny the rooms at Fremont seem after staying the large rooms at MSS.... yes, I've stayed at Fremont several times and know the rooms are smaller than most but they became almost claustrophobic after being at MSS the previous two nights....)

I wound up exploring a few different floors just to see and noticed that all were similarly decorated and EVERY ONE OF THEM REEKED OF POT. For all four days, there was a heavy odor of marijuana all over the hotel floors from all over. No big deal for me as I indulge myself (brought my own stuff from CA as it's way cheaper, though this trip was just vape pens and edibles). Just a heads-up for those of y'all who can't stand the smell...

No matches in our smoking room but they brought some right up upon a call down to the desk. This place also doesn't use individual soaps/shampoos - they're pre-loaded into pumps in the shower. No bathtub in our room. Water pressure was decent enough though.

They also had a menu on the TV that you could order up a "Forgot Something?" - no prices listed so I'm assuming it was complimentary, including Magnum condoms, tampons, shaving kits, and so on. I meant to order something but forgot to that. They also had board games you could have sent up to the room, including Twister.

Enough on the hotel itself.  On to the NYE WTF and disaster at Margaritaville....

I'm totally absolutely positive that we ate at least daily when we were at The Linq but I can only recall Off the Strip - it was okay - the burgers are TEN OUNCES each! I skipped the burger and just shared the truffle mac 'n cheese (decent) and had some green beans (excellent) and bread and butter, which was LOUSY. I sent it back.

One of the days, we walked over to Margaritaville for lunch. It wasn't too busy and we were seated fairly quickly. I wanted sweet tea but they were out or didn't have it. The server, Jared, was very nice and offered unsweet with sugar. No. That's not how it's done. I kept to water; The Dog ordered the 5 O'Clock Somewhere cocktail. 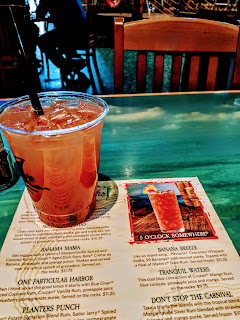 Notice how the picture on the menu does not look like the actual drink served, other than both are red in color. It's being served in a plastic tumbler that doesn't even say Margaritaville rather than a nice tall glass as shown in the picture on the menu.  Jared brought us over some orange after we inquired for the garnish. I pointed out the pineapple in the pic. He went and found some pineapple and brought it in a cup. Oy. It was tasty enough but disappointing.

We weren't starved so we split the Volcano Nachos for $19.99. They looked delightful when they arrived. Except after we ate the top layer, it was several layers of dry chips underneath. Meh.

To top it all off, they didn't really play much Jimmy Buffett. A bit when we first arrived then it switched to some sort of pop music that I didn't recognize.

In short: If you're a Parrothead, don't bother to go here. You will walk out disappointed and sad.

The Dog just reminded me that we also ate at Hash House A Go Go at The Linq. Very tasty, as usual! We ate at the bar because the wait was upwards of an hour each time we stopped by.

At some point, The Dog hit a bunch of Quick Hits for a win of $900, which put him back on the good foot. Meanwhile, I kept sliding downward with my bankroll.

Finally, it was NYE. The party didn't start until 10:30pm. Around 11pm, we cruised downstairs to go to The Vortex, the open-air space at The Linq overlooking the Strip, where the party was being held.

First off, apparently it was a SuperHeroes/80s theme. They didn't bother to mention any of this in any of the mailers. I would have probably worn a side-pony if I'd known. The menu was this: 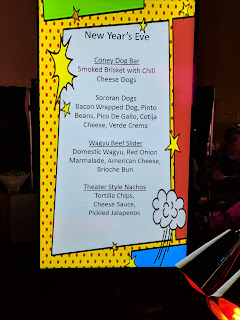 The reality was plain/naked mini hot dogs, plain mini burgers with cheese (no way they were true Waygu) and wings of a few varieties that had a large bowl of full-length celery stalks next to it. I was surprised to see that they had even bothered to cut the stalks off the base of the celery. The line was long to get any of it.

The dessert table offered various fudges (none tasty) and chocolate dipped coconut macaroons (decent enough but not enough to get seconds). It also offered Spiked Hot Chocolate with Bailey's in classic chocolate and in Red Velvet. I got some of it. I kid you not, it was like drinking CAKE BATTER. It was ridiculously thick but loaded with liquor. I probably would have actually finished it but drinking hot cake batter ain't my thing. You can see below how it sticks to the side of the cup. This is about five minutes after I had my last swig of it. 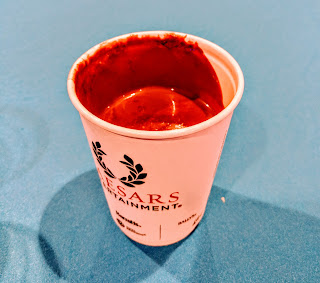 I wrongly assumed that everyone that was there was in on a comp - many people paid $200+ each for this "party". I found this out when we stood in line for 18 minutes to get a drink. I would have been screaming pissed if I paid that kind of money and couldn't even get a cocktail in my hand. They didn't bother to pass champagne at midnight even. They said there were party favors included but all I got was my wristband for entry. Again, it was comped so whatever but for those that paid, damn.

The fireworks went off - they seemed to be coordinated amongst all the casinos and were the same at all the buildings we could see, which was very cool. Finally, I managed to make it to the edge of The Vortex and looked down on LVB. HOLY MOTHER! I am grateful I was up at The Vortex rather than down in that crazy mess!! 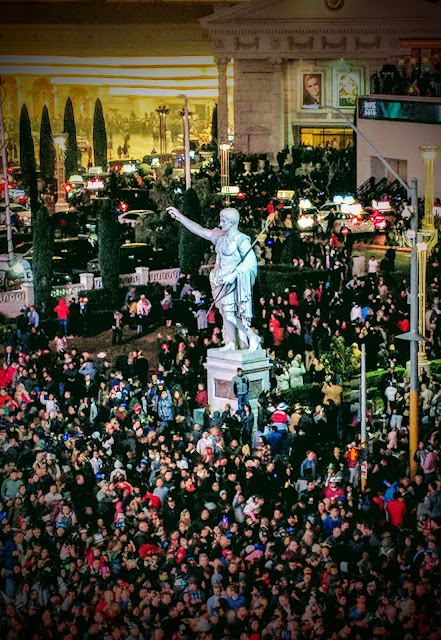 Now some shots from NYE in The Vortex at The Linq: 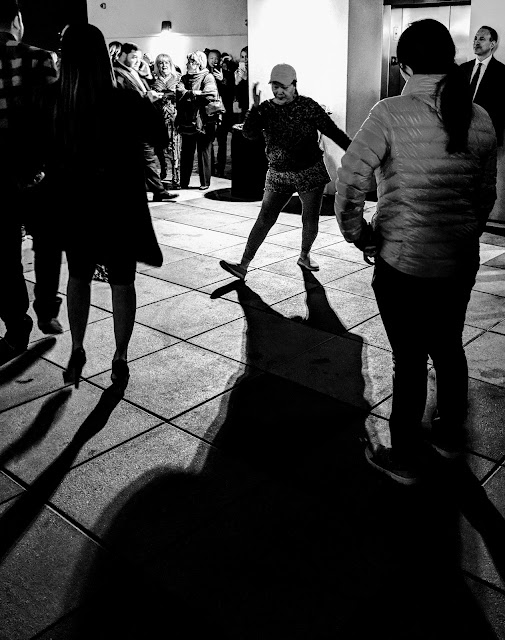 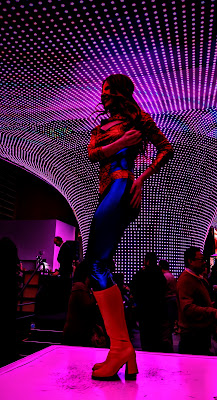 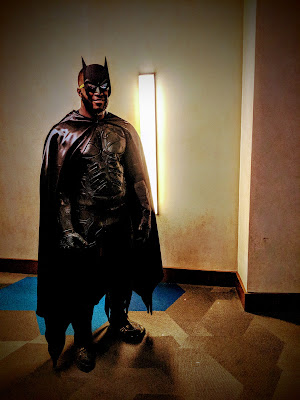 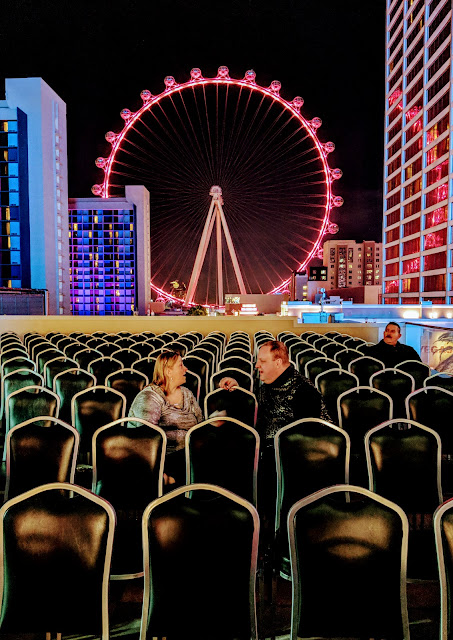 A photo was also included in this and The Dog and I stood in line to have it taken. It came out cute but cripes I was wearing a lot of damn makeup! They gave us a matted 5x7 print of it but the line to pick it up was ridiculous long. I asked what happened if we didn't wait. They told me it would be at TR desk the next morning. Super! We picked ours up the next day without issue.

On Monday, Auburn was playing in their bowl game. They lost. Due to the early morning time of it airing on New Year's Day, we just stayed in the room to watch that disaster.

Monday evening, I took a minute to go meet up with my business partner's old mentor who had opened an art gallery down in the Arts District - Cliff's Airbrushing. He was as cool as I'd heard. He recently finished a job over at Bellagio doing art for their floral displays and does work all over Las Vegas. 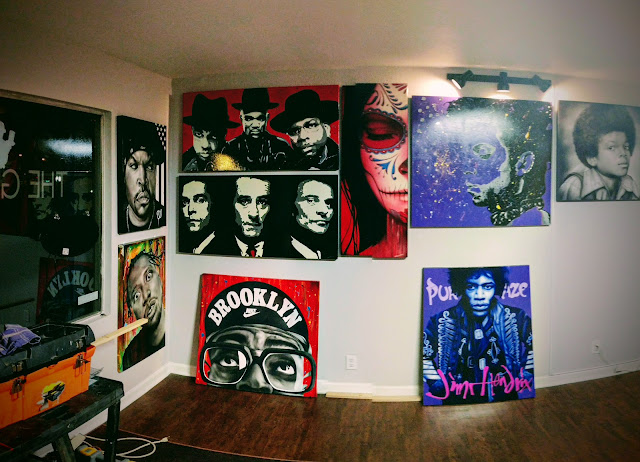 Then, I returned to playing slots and just couldn't quite get a damn thing. Down, down, down. Eh la. That's how it goes some trips.

Monday night, we decided to go see Ellis Island. We hadn't been there for years. Apparently, we spent enough to score two free steak dinners and two free beers with dinner! The server seemed very surprised when we handed over our free steak dinner tickets. It's a tiny casino but they have a very active karaoke bar. Next trip, we'll totally go hang there for a bit.

We also stopped in to Giordano's for a deep dish. So good and worth the wait!

Finally on Tuesday, it was time to head back to San Diego. We knew that Primm would be backed up for traffic so The Dog offered to let me navigate a back route to avoid it. YAY!! We drove down through Searchlight and stopped at Terrible's to discover this: 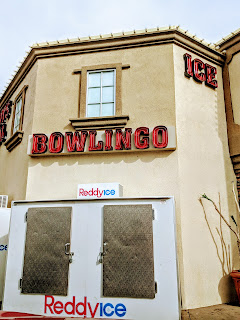 Upon going in, it turns out Bowlingo was down for the count. Out of Order.
Labels: american green cliff's airbrushing ellis island casino jimmy buffett failure karaoke in las vegas margaritaville marijuana resort nipton ca nye in las vegas the linq the vortex