So off to the Fremont on Wednesday. At some point, I got a text from one of my Tijuana Amigos de Santa and he alerted me to the half-price teddy bears available at Walmart on clearance. (we had a big issue this past year trying to find good teddy bears at a good price). The Dog and I hit three different Walmarts and scored piles of teddy bears!! The backseat of the fancy red Honda coupe was then loaded to the brim with about thirty teddy bears. I'm sure the valets had a real headscratcher about that!

I actually did all right at Fremont but The Dog kept getting his ass kicked and then got obliterated somehow on the tables, too, where he usually shines. No bueno!

For lunch one day, we ate at the buffet at Fremont. Really not worth the time to stand in line for. It's better to go down to the one at MSS if you're dying to eat a buffet. Got the mac 'n cheese - it had no flavor. I mean none. It tasted like plain noodles, even though I could see the cheese!

We walked down to Nacho Daddy for dinner and it was well worth the walk!! They also offer a military discount. We had the BBQ Pork Nachos - simply delightful!! It might be said that I was high as hell and probably anything would have tasted delicious but my husband was not and he loved them, too.....

Also, we ate TWICE at the White Castle down on Fremont (again, they give a military discount FYI). Good but it ain't a Krystal Burger....

We also played Sigma Derby at The D. Losses and more losses but no big whoop as the drink service was decent and it's fun to play it for a while. 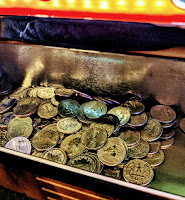 Speaking of quarters, I played the coin-drop machines at Fremont. Didn't win big but didn't lose either so...I also like to play Keno at Fremont. Wound up even and they always have good drink service in the Keno area.

We did a stroll down Fremont to go check out Golden Gate. This is probably the first trip I haven't played there but I wanted to see the new interior, which was still under construction when we were there this summer. Stunning new entrance area with a lovely artful chandelier that is ruined by four television racks in front of it. 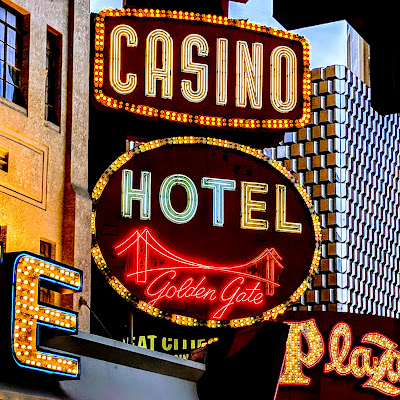